When nuclear energy was first harnessed, the US Navy became extremely interested in using it to power its fleet of submarines. A nuclear-powered submarine has a critical nuclear chain reaction going on near the center of the submarine. This boils water, which then goes through a turbine. The turbine is hooked up to a big drive-shaft that is hooked to a propeller on the back of the submarine. There are auxiliary turbines as well that are hooked up to electric generators to make electricity for the systems on the sub.

There are two main types of nuclear-powered submarines:

Figure 1. An Ohio-class ballistic missile submarine. (From The Smithsonian)

Ballistic missile subs (AKA “boomers”) are not only powered by a nuclear reactor, but they also carry a large amount of missiles with thermonuclear weapons for warheads. These submarines are supposed to just prowl around in unknown locations in the sea as a deterrent, so if someone nukes you, you can nuke them back from these subs and they’ll never be able to prevent you from doing so because you could be anywhere. In essence, these prevent people from nuking other people.

Figure 2. A Los Angeles-class fast-attack submarine. (From The Smithsonian)

Fast attack subs are the hunter-killers of the sea. Their job is to hunt down and destroy other submarines or vessels. They’re fast and typically armed with things like Tomahawk missiles, and MK-48 torpedoes.

Nuclear propulsion worked so well for submarines that a few other vessels got nuclear engines instead of conventional diesels. Most notably, vessels like the Gerald R. Ford-class aircraft carriers have a few nuclear reactors powering them. The US Navy has had nuclear-powered cruisers as well, but does not have any now.

Running merchant ships with nuclear-powered engines is a good way to decarbonize the world’s shipping infrastructure. In the early days of the nuclear industry, this received a large amount of attention, culminating in the creation and operation of the NS Savannah.

Did you know? The NS Savannah was a nuclear-powered cargo ship that operated between 1962 and 1972. It’s deactivated now and moored at Pier 13 in Baltimore.

Some good information on nuclear marine propulsion may be found in:

Today, Russia operates a fleet of nuclear-powered icebreakers. A few nuclear merchant ships operated but only one is in commission today (the Sevmorput). They would be an excellent way to reduce the emissions from the huge amount of international shipping that’s ongoing today. 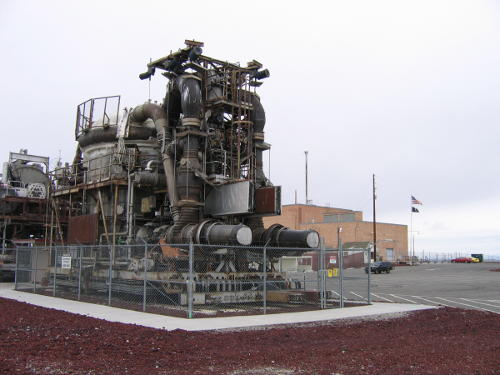 Nuclear propulsion is well-suited for space travel and rockets, so that’s under development. The Russians did have some nuclear-powered tanks. Before intercontinnental ballistic missiles were developed, the US Air Force worked a lot on the Aircraft Nuclear Propulsion project to make a nuclear-powered long-range airplane. Various test reactors like HTRE-3 pictured here were operated in this project but no plane ever actually flew, so far, on nuclear power.

The only nuclear-powered cars you’re likely to ever see are electric ones charged by nearby nuclear power plants.