What is a nuclear fuel cycle?

A nuclear fuel cycle is the path that we put heavy atoms through in order to extract energy from them, starting at the day we find them and ending when their wastes have decayed to stability and are no longer dangerous. Fuel cycles can take on a wide variety of configurations, and different configurations may make more sense than others in certain areas based on natural resource availability, energy growth projections, and politics. All commercial power-producing reactors in the USA are operating on a once-through cycle (which is more of a line than a cycle), while some in Europe and Asia go through a once- or twice-recycled cycle (which sounds funny). The economics, politics, and long-term sustainablity of nuclear energy depend critically on fuel cycles.

When whipping up a new fuel cycle, you usually have several processes to mix and match. These typically fall into three broad categories. First, we have the front end – steps used to prepare heavy atoms for insertion into nuclear reactors. So, you might survey the land, find uranium (or thorium) ore, dig it up, convert it to a gas so that you can enrich it, enrich it, convert it to a solid fuel form, and then fabricate it into fuel assemblies. We nuclear engineers have coined the processes of the front end of the nuclear fuel cycle as mining, conversion, enrichment, and fabrication. 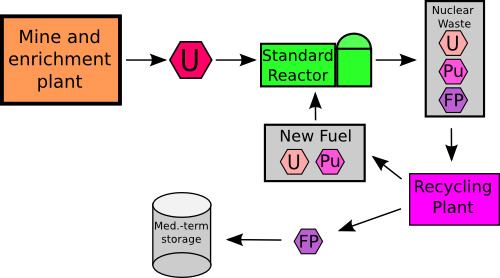 Figure 1. An example of a closed fuel cycle. Here nuclear material is recycled. Put your mouse over each image for more info.

The in-reactor part of the fuel cycle

The second category of fuel cycles is where we split atoms to generate energy. While we’re at it, we have an exciting list of fuel cycle processes to do that is only limited by our imaginations. We can put fertile material around the reactor core and breed new fissile fuel, we can use liquid fuel with online refueling and fission-product separation, we can strategically place transuranic targets to reduce the toxicity of nuclear waste, we can perform alchemy, converting common atoms to rare or valuable ones, etc. We can reprocess, recycle and refabricate here. In reality, we are inhibited by economics, politics, licensing, and operations experience. Because of these, the most common type of fuel cycle has only one thing in this category: burn Uranium fuel rods in a reactor for about 3-5 years and remove them. In France, we recycle plutonium for one loop in something called MOX fuel.

The back end of the fuel cycle (nuclear waste disposal)

Once we’ve finished getting energy out of the heavy atoms, we must dispose of the left-over ones and the dangerously radioactive minor actinides and fission products (the two smaller atoms created by splitting one large one). Processes to safely and responsibly accomplish this are the third category of our dynamic fuel cycle cast, called the back-end. The internationally accepted approach to waste disposal is to first ensure that the nuclides are immobilized (put in a material with low leachability, good mechanical strength, and the capability to hold large amounts of waste) and then placed underground. Of course, arguments arise in how these two steps should be done. Materials used for immobilization are typically ceramics or glass. To protect against criticality accidents, these materials often have neutron-eating atoms such as boron mixed in. Finding a place to bury it is certainly a politically hot topic. The idea is to have as many barriers as is practical between the dangerous nuclides and the environment.