What is nuclear non-proliferation? 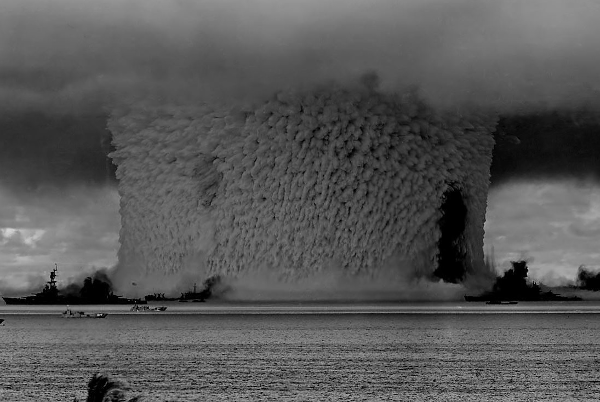 To reach their goal, people working for non-proliferation must secure and monitor existing nuclear weapons and weapon material, they must monitor facilities conceivably able to produce weapon material and minimize the construction of such facilities, and they must perform political gymnastics to minimize the allure of nuclear weapons to the world.

How is nuclear power tied to nuclear non-proliferation?

The three special materials with which one can fabricate nuclear weapons are plutonium, highly-enriched uranium, and tritium (in thermonuclear weapons). Certainly the precision explosives and fabrication of weapons is difficult, but obtaining material is the major hurdle. As they currently operate, most nuclear reactors are proliferation concerns for two corresponding reasons:

Thus, any country with a nuclear reactor and a plutonium chemist or an enrichment plant has access to materials which could be used to develop nuclear weapons. However, both items have many subtleties to complicate their discussion.

What can be done to stop proliferation?

So, can we expand nuclear power without risking proliferation? Certainly not without being careful. Currently, the IAEA (the UN nuclear watchdog) routinely inspects nuclear facilities around the world to verify that only peaceful work is being done. They inventory all special material very carefully. If a facility doesn’t allow inspectors in or shows signs of militarization, the political world decides what to do. The IAEA does not have access to all of Iran’s facilities nor North Korea’s. Sanctions have been issued, but we have not seen particularly drastic action on these sensitive issues. This method of non-proliferation is called something along the lines of “safeguards and verification.”

One rather harsh non-proliferation action, called Operation Opera, occurred when the Israeli Air Force bombed a nearly-completed nuclear reactor in Iraq back in 1981. This was widely condemned by the international community.

Besides inspections and political action, there are inherent changes to the nuclear power status-quo that can help with non-proliferation. The most mainstream change is the establishment of an international fuel bank, where weapon states enrich and fabricate nuclear fuel and then sell it through an internationally-controlled middleman who guarantees its delivery to non-weapon user-states. This would keep enrichment facilities out of the hands of new users of nuclear power. User-nations would benefit from not requiring the expensive front-end infrastructure of fuel fabrication, but they would probably be slightly worried about their energy supplies in any politically turbulent times. This idea has come under the names GNEP and, more recently, the international nuclear fuel bank.

Another option is to use a thorium fuel cycle, based on natural thorium minerals rather than natural uranium. This would (at least at first) still require enrichment or some other supply of fissile material, but it has the benefit of not producing plutonium. It produces Uranium-233 which can also be used in weapons, though, so this certainly isn’t a perfect solution.

Can we get rid of all nuclear weapons forever?

Technically, of course, yes we can. We can just burn the material in nuclear reactors and convert it to electricity (we actually did this between 1993 and 2013, when 10% of US electricity came from dismantled Soviet weapons). Realistically, however, the issue is that of Pandora’s box. We now know that using 1940s technology, nuclear weapons can be made. Even if we could somehow convince every country to destroy their weapons (good luck keeping them from hiding just a few of them in some dark mountain cavern, for old time’s sake), we cannot forget the concept. So rather than fighting for the eradication of nuclear weapons altogether, try rallying for the reduction of our stockpiles from tens of thousands to about ten.

Which countries have nuclear weapons?

Weapon states are listed here with the date of their first test in parenthesis.

* Israel has never actually admitted having nuclear weapons, but is widely accused of having many [bbc].

Other aspects of non-proliferation

Besides stopping the production of weapons from nuclear reactor technology, non-proliferation also covers some security issues such as portal monitoring. Many folks are employed building detector systems that can scan a passing truck or shipping container and alert the user if special nuclear material is contained inside without opening it. We at whatisnuclear.com appreciate this massive effort, but concede that if someone were really to put forth the effort to build a nuclear weapon, they probably wouldn’t ship it FedEx.

Yet another aspect is that of the dirty bomb. Thousands of dangerously radioactive materials exist across the world, in hospitals, laboratories, and industries. If these were attached to a standard bomb and set off in a populated area, the dispersed radiation could cause serious havoc and even radiation poisoning. We have people working on inventorying, tracking, and detecting these materials as well.