Radiation exists in nature, and has since the beginning of time. Radio waves and light are examples of low-energy (harmless) radiation, while x-rays and gamma rays are examples of higher energy radiation which, in large enough doses, can cause biological damage. The amount of radiation we receive on a daily basis is called background radiation. Most of your background comes from inhaling the natural (and radioactive) element radon in the air, but 1/6 of your background (on average) comes from cosmic rays [1]. These rays are of interest when thinking about radiation on flights. 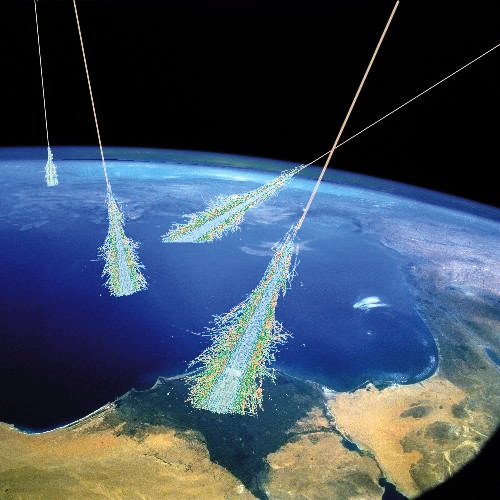 Cosmic rays are energetic particles from space. Most of them are protons that probably got shot out of exploding stars (supernova) in our galaxy. They are flying around the galaxy and hit Earth very regularly. When they hit the atmosphere, they cause an air shower, where hundreds of less energetic particles are produced from one incident cosmic ray. Because of the way Earth’s magnetic field is oriented, it’s easier for galactic cosmic rays to reach the ground on the polar regions than it is at the equator.

Besides galactic cosmic rays, events on our own sun shoot out the minority of cosmic radiation, so we do see some changes in the cosmic dose during the 11-year solar cycles.

The atmosphere shields people from the majority of these. But when you’re in an airplane, you have a lot less shielding.

Dose in an airplane

When you’re in an airplane, high above the Earth, you receive much higher radioactive doses from cosmic rays than people on the ground. In fact, commercial airline workers who are on planes for up to 900 hours per year, receive among the highest occupational dose of any occupation, coming in just below uranium miners with 3 mSv/year [2]. Note that nuclear power plant operators receive less than half of this.

Just for fun, I thought I’d take some radiation measurements on a flight. I had to fly from Detroit to Paris for work recently, so I brought along my Geiger counter and GPS to keep track of radiation vs. altitude. Check it out: 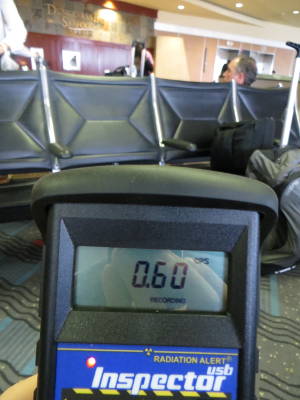 You can clearly see that the dose increases with altitude. Since this is a polar flight, the dose is higher than average for normal flights. A typical dose rate at cruising altitudes in polar regions is 7 µSv/h, while equatorial flights would be more like 2.5 µSv/h [1]. This means that you’d have to be in the air in polar regions (US to Europe, etc.) for about 21 hours to get the same dose as a full mouth series of dental X-rays (150 µSv). The average background + medical + occupational dose to someone in the US is 6240 µSv/year [3], so a few flights won’t change that much. Only professional aircrew get substantial fractions of their yearly dose from the cosmos.

So is it dangerous?

Nope. These doses are well below any levels that have been shown to cause cancer or other damage. A 2002 study of 10,000 airline pilots was performed over 17 years that found that "no marked risk of cancer attributable to cosmic radiation is observed in airline pilots." [4] So as long as you’re flying less than an airline pilot, you have nothing to worry about.

Outside of the atmosphere, cosmic radiation poses a major problem for interplanetary travel (like for manned missions to Mars or a colony on the moon), so that’s something to keep in mind.