What about nuclear waste?

Nuclear waste is made of radioactive atoms generated after large atoms split. Nuclear reactors make nuclear waste during operation. The physics leverage of E=MC² makes nuclear waste uniquely concentrated; it’s both extraordinarily small and seriously hazardous. The relatively tiny amount of waste is intriguing in that its overall environmental, health, and land footprint can be minimal. But, there is legitimate concern that the hazards may be difficult to contain.

This page digs in to the nuance of nuclear waste, and points to additional information for going deeper. Here, you will learn:

What is nuclear waste?

Nuclear energy is released when a nuclear fuel nucleus snaps into two in a reactor. The key component of nuclear waste is the leftover smaller nuclei, known as fission products.

From the outside, nuclear waste looks exactly like the fuel that was loaded into the reactor — typically assemblies of cylindrical metal rods enclosing fuel pellets. But because nuclear reactions have occurred, the contents aren’t quite the same.

Like everything, nuclear waste is made of elements you can find on the periodic table, including isotopes of iron, zinc, germanium, zirconium, silver, and iodine. You never know which two fission product elements you’re going to get for a given fission event, but you always get the same average composition as billions upon billions of atoms split. You basically get a huge variety of elements, shown below.

Nuclear fuel loaded into commercial reactors is generally in the form of solid ceramic pellets that are stacked into metal tubes and bundled together in fuel assemblies. After the atoms in the pellet split to release their energy, the pellets in tubes emerge as nuclear waste. Nuclear waste is roughly in the same form as the pellets that went in, and basically has the consistency of a teacup. Commercial nuclear waste is not green ooze (which may have been inspired by liquid-form nuclear weapons waste like that at Hanford).

You may also hear nuclear waste referred to as spent nuclear fuel or used nuclear fuel. These terms are intended to indicate that it is recyclable, but they all refer to the stuff known commonly as nuclear waste.

What are the hazards of nuclear waste?

When a nucleus splits, most of the energy is released immediately and carried off by coolant to do useful work. However, energy continues to be released for thousands of years after the atom splits. This afterglow heat is what makes nuclear waste hazardous. Unlike most toxic waste, the fact that nuclear waste becomes less toxic with time is quite unique.

These delayed energetic emissions mean that nuclear waste is highly radioactive. When it first comes out of the reactor, it is so hazardous that if you stood close to it while it was unshielded, you would receive a lethal radiation dose within a few seconds and would die of acute radiation sickness [wikipedia] within a few days. As the energy emerges, the waste becomes less radioactive (and so also less hazardous) every moment. Still, it does not transform from hazardous to benign for thousands of years.

The nuclear waste question fundamentally asks whether or not humanity can prevent this radioactive material from causing harm to people and the environment. This question was recognized early on in nuclear history, by Enrico Fermi himself (the lead scientist in charge of the world’s first man-made nuclear chain reaction), who stated:

Since he made that statement, we have gained more than 60 years of experience with nuclear power stations. So how have we done?

What do we currently do with our nuclear waste?

In practice, the spent fuel is never unshielded. It is kept underwater (water is an excellent shield) for 5–8 years in spent fuel pools until the radiation levels decay to levels that can be cooled without water.

After cooling in the spent fuel pools, nuclear waste is either recycled (France) or moved into large concrete canisters called dry casks (most other places). These casks hold several spent fuel assemblies each.

The following video shows a world-expert in nuclear waste walking amongst the spent fuel in dry casks at the Columbia Generating Station in Washington state.

To our knowledge, no one has been injured or killed by commercial nuclear waste in dry cask storage. While future incidents are possible, it is fairly clear that the rate of injury from this material pales almost in insignificance compared to the 8 million people per year who actually do die from air pollution complications caused by fossil fuel and biofuel particulate emissions (WHO numbers). Not to mention potential future mortality due to climate change.

The fact that nuclear plants keep all of their waste on site for their entire lifecycle can be considered a major positive environmental attribute compared with energy sources that emit vast waste into the atmosphere or produce vast manufacturing wastes during fabrication.

In France, the waste that comes out of the recycling process (discussed below) is turned into glass in a process called vitrification, and then stored in air-draft cooling racks.

What are the long-term options for nuclear waste?

Dry cask storage above ground is quite stable, but both nuclear advocates and opponents can agree that there are reasons to try to get it even further away from the biosphere.

There is scientific consensus that putting the nuclear waste in geologic formations that are expected to be stable for many millions of years is appropriate (e.g. see the Blue Ribbon Commission report (pdf) and the 2020 OECD report (pdf) on waste disposal). This way, if the material is released in the far future, it will have already released all of its afterglow heat and will be radiologically inert.

The US studied and constructed large portions of Yucca Mountain as the national spent fuel disposal site, but the community was not consulted sufficiently beforehand, and the project suffered what can only be called a political death.

The US does have an operational nuclear waste repository in a massive salt formation in New Mexico at a site called the Waste Isolation Pilot Plant. It is designed for military nuclear waste rather than civilian, but many of the challenges are related.

Finland is currently the world leader in long-term commercial nuclear waste disposal progress. Their Onkalo deep geologic repository is expected to the be the world’s first commercial one to operate. They produced an excellent video describing the plan.

A different form of geologic repository, called a deep borehole, has been proposed by scientists since the 1950s, and has recently gotten much more attention due to advances in drilling techniques. Deep boreholes involve drilling a hole about 5000 meter deep and stacking the spent fuel assemblies there before capping it off. By going ~10x deeper than traditional repository designs, the material is likely to be extra isolated from the biosphere for extra time.

The US DOE planned a Deep Borehole Field Test to better understand the science of this technology option (without any actual nuclear waste), but the project was cancelled in 2017 due to strong public opposition.

Deep boreholes are being commercialized by a company called Deep Isolation.

Nuclear waste generally is over 90% uranium. Thus, the spent fuel (waste) still contains 90% usable fuel! It can be chemically processed and placed in other reactors to close the fuel cycle. A closed fuel cycle means much less nuclear waste and much more energy extracted from the raw ore. Additionally, this process allows you to convert your waste into chemical forms that are totally immobilized.

France currently recycles their spent fuel. They put the remaining good nuclear fuel back in their reactors in the form of MOX fuel and immobilize the remaining waste in vitrified borosilicate glass.

The US had a recycling program featuring the use of advanced fast reactors (which have not been deployed on any major scale yet) that was shut down because it created Plutonium, which could be used to make a nuclear weapon. Were some plutonium diverted in the recycling process, a non-nuclear entity could be one step close to building a bomb. However, under programs such as the (now stalled) GNEP [wikipedia], where only countries who already have nuclear weapons recycle, proliferation-free waste recycling can exist. Since the many of the largest energy users are already nuclear weapons states, a massive expansion of nuclear could be done there with no additional proliferation concerns whatsoever.

You will find more discussion of proliferation on our nonproliferation page. Please remember to contact us with your comments or questions.

The longest living nuclides in nuclear waste are the ones that can be used as fuel: plutonium and the minor actinides. If these materials are burnt in fuel through recycling, nuclear waste would only remain radioactive for a few hundred years, as opposed to a few hundred thousand. This significantly reduces concerns with long-term storage. This concept is called Partitioning and Transmutation and is discussed in elaborate detail in this IAEA report.

How does nuclear waste move from the reactor to the disposal site? We have developed containers that can handle the hazards of transportation without breaking. The US DOE and others have for example tested these containers by burning them in jet fuel, smashing into them with rocket-powered trains, crashing them into cement walls, and dropping them onto spikes.

Still, some communities have expressed concern that, even if the radiation doesn’t leak, there could be a long delay on rail traffic if a derailment happens. This can be a major concern in the oil field areas of Texas where many millions of dollars of oil are rail shipped out per day. So it’s not just about radiological safety, but also these kinds of subtler concerns that must be considered.

Other things have been proposed as a solution for nuclear waste but are mostly bad ideas.

How much nuclear waste does nuclear energy create?

If all the electricity use of the USA was distributed evenly among its population, and all of it came from nuclear power, then the amount of nuclear waste each person would generate per year would be 39.5 grams. That’s the weight of seven U. S. quarters of waste, per year! A detailed description of this calculation is here. If we got all our electricity from coal and natural gas, expect to have over 10,000 kilograms of CO2/yr attributed to each person, not to mention other poisonous emissions directly to the biosphere (based on EIA emissions data).

For comparison, in 2007 alone the US burned 948,000,000 metric tonnes of coal. This means that coal plants made 32 times more waste every single day than the US nuclear fleet has made in the past 45 years! Granted, coal made a higher fraction of the country’s electricity, but the numbers are still crazy impressive for nuclear.

The astoundingly low amount of nuclear waste is thanks to the near magical energy density of the atom. 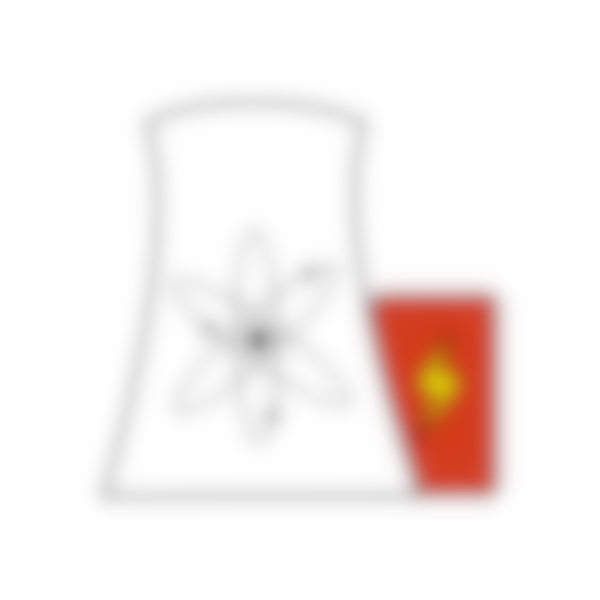 Spent nuclear fuel composition varies depending on what was put into the reactor, how long the reactor operated, and how long the waste has been sitting out of the reactor. A typical US reactor’s waste composition is laid out in table 1. Notice that most of the Uranium is still in the fuel when it leaves the reactor, even though its enrichment has fallen significantly. This Uranium can be used in advanced fast reactors as fuel and is a valuable energy source. The minor actinides, which include Neptunium, Americium, and Curium, are long-lived nuclides that cause serious concern when it comes to storing them for more than 100,000 years. Fortunately, these are fissionable in fast reactors and can thus be used as fuel! This still would leave us with the fission products. The decay of each nuclide vs. time is shown below.

A chart of the activity of all the radioactive nuclides as a function of time up to 1 million years from 1 MT of nuclear waste, burned to 45 MWd/kg. Click for a larger view. Data was computed with ORIGEN-S from Oak Ridge by whatisnuclear.com.