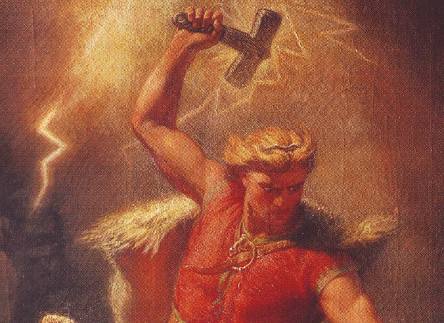 Thorium is a basic element of nature, like Iron and Uranium. Like Uranium, its properties allow it to be used to fuel a nuclear chain reaction that can run a power plant and make electricity (among other things). Thorium itself will not split and release energy. Rather, when it is exposed to neutrons, it will undergo a series of nuclear reactions until it eventually emerges as an isotope of uranium called U-233, which will readily split and release energy next time it absorbs a neutron. Thorium is therefore called fertile, whereas U-233 is called fissile.

Reactors that use thorium are operating on what’s called the Thorium-Uranium (Th-U) fuel cycle. The vast majority of existing or proposed nuclear reactors, however, use enriched uranium (U-235) or reprocessed plutonium (Pu-239) as fuel (in the Uranium-Plutonium cycle), and only a handful have used thorium. Current and exotic designs can theoretically accommodate thorium.

The Th-U fuel cycle has some intriguing capabilities over the traditional U-Pu cycle. Of course, it has downsides as well. On this page you’ll learn some details about these and leave with the ability to productively discuss and debate thorium with knowledge of the basics.

Up and coming nuclear reactor powerhouses China and India both have substantial reserves of Thorium-bearing minerals and not as much Uranium. So, expect this energy source to become a big deal in the not-too-distant future…

Hype alert   If someone on the internet told you something unbelievable about Thorium, you might want to check out our Thorium Myths page just to double check it.

What are the key benefits of Thorium?

Are there any additional benefits of Thorium?

What are the downsides of Thorium?

Thorium is generally accepted as proliferation resistant compared to U-Pu cycles. The problem with plutonium is that it can be chemically separated from the waste and perhaps used in bombs. It is publicly known that even reactor-grade plutonium can be made into a bomb if done carefully. By avoiding plutonium altogether, thorium cycles are superior in this regard.

Besides avoiding plutonium, Thorium has additional self-protection from the hard gamma rays emitted due to U-232 as discussed above. This makes stealing Thorium based fuels more challenging. Also, the heat from these gammas makes weapon fabrication difficult, as it is hard to keep the weapon pit from melting due to its own heat. Note, however, that the gammas come from the decay chain of U-232, not from U-232 itself. This means that the contaminants could be chemically separated and the material would be much easier to work with. U-232 has a 70 year half-life so it takes a long time for these gammas to come back.

The one hypothetical proliferation concern with Thorium fuel though, is that the Protactinium can be chemically separated shortly after it is produced and removed from the neutron flux (the path to U-233 is Th-232 -> Th-233 -> Pa-233 -> U-233). Then, it will decay directly to pure U-233. By this challenging route, one could obtain weapons material. But Pa-233 has a 27 day half-life, so once the waste is safe for a few times this, weapons are out of the question. So concerns over people stealing spent fuel are largely reduced by Th, but the possibility of the owner of a Th-U reactor obtaining bomb material is not.

One especially cool possibility suitable for the slow-neutron breeding capability of the Th-U fuel cycle is the molten salt reactor (MSR), or as one particular MSR is commonly known on the internet, the Liquid Fluoride Thorium Reactors (LFTR). In these, fuel is not cast into pellets, but is rather dissolved in a vat of liquid salt. The chain reaction heats the salt, which naturally convects through a heat exchanger to bring the heat out to a turbine and make electricity. Online chemical processing removes fission product neutron poisons and allows online refueling (eliminating the need to shut down for fuel management, etc.). None of these reactors operate today, but Oak Ridge had a test reactor of this type in the 1960s called the Molten Salt Reactor Experiment [wikipedia] (MSRE). The MSRE successfully proved that the concept has merit and can be operated for extended amounts of time. It competed with the liquid metal cooled fast breeder reactors (LMFBRs) for federal funding and lost out. Alvin Weinberg discusses the history of this project in much detail in his autobiography, The First Nuclear Era [amazon.com], and there is more info available all over the internet. These reactors could be extremely safe, proliferation resistant, resource efficient, environmentally superior (to traditional nukes, as well as to fossil fuel obviously), and maybe even cheap. Exotic, but successfully tested. Who’s going to start the startup on these? (Just kidding, there are already like 4 startups working on them, and China is developing them as well).