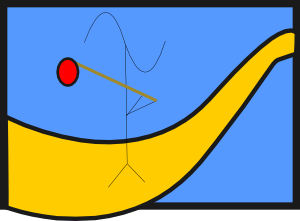 Traveling-wave reactors (TWRs) are advanced nuclear reactors that are capable of eventually running "forever" given only depleted uranium fuel. The concept is similar to a candle: given a match, a candle will burn from top to bottom. If you kept putting more wax beneath the candle, it would continue to burn without requiring another match as long as you kept the wax coming. Most reactors today run almost completely on matches (enriched uranium), which are expensive and limited in supply. Traveling-wave reactors only need one batch of matches before they can run on wax (depleted uranium) for a very long time. These reactors reach sustainability levels attainable by typical fast reactors, but do so without requiring the reprocessing plants that were the main concern when politicians effectively abandoned the US fast reactor program in the 1970s.

TWRs have been studied since the 1950s. More recently, the concept was studied in the form of the CANDLE reactor, which truly looks like a candle. TerraPower has begun an engineering design of a TWR. TerraPower’s recent publications show that they are working on a standing-wave manifestation of a TWR, meaning the fuel is slowly shuffled in a manner to keep the power distribution stationary with time as opposed to stationary fuel with the power distribution moving through it.

What is the motivation behind TWRs?

Nuclear reactors are typically fueled with uranium that has been enriched from its natural form to have more of the splittable isotope than usual. The process of enrichment for creating nuclear reactor fuel is mechanically identical to the process of creating nuclear weapon material (but logistically very different). Thus, if you have an enrichment plant, you’re that much closer to having nuclear weapon capabilities (hence the argument between the West and Iran). Additionally, typical fast reactors can only reach their highly-sustainable mode of operation if they get very high fuel utilization – something that historically requires reprocessing. Unfortunately, the reprocessing facility is another potential path towards nuclear weapons as a source of separated plutonium rather than highly-enriched uranium. Traveling-wave reactors are unique in their ability to reach highly-sustainable operation (meaning current uranium resources will last for thousands of years instead of hundreds with current technology) with minimal enrichment and without reprocessing.

How do TWRs work?

As you can learn elsewhere on this site, the poorly splitting isotope of uranium (U-238) can be converted to easily splitting plutonium given the investment of a single neutron. When a second neutron comes around, the newly transformed plutonium will readily split and produce much energy. While this concept is used by breeder reactors via recycling, TWRs do not require the plutonium to be removed from the reactor and refabricated into new fuel. The power effectively moves from the part of the core that’s active to the part of the core that has just produced enough fuel to sustain a chain reaction – hence the idea of a traveling wave. Note that from another frame of reference this is similar to moving freshly bred fuel into the active part of a core during a shuffling outage.

Fission products that build up as heavy atoms split are often neutron absorbers, working against sustaining a chain reaction. To prevent these from bringing the reactions to stop, TWRs must be fast reactors. Only they have the neutron economy to reach TWR operation.

Why haven’t we built TWRs before?

TWRs are are unique among reactors in that they require a minimum fuel burnup in order to work. It’s a matter of conservation of neutrons – enough of them must be absorbed in the depleted uranium (DU) before it becomes a useful fuel. The amount of time required for the fuel to stay in the reactor is longer than fuel has stayed in a reactor in the industry’s experience. Special fuel and materials have been run up to 20% burnup (~187 MWd/kg) without showing signs of problems, so there is reason to believe it can go higher under the right conditions. TWRs depend on having their minimum neutronic burnup be lower than the maximum radiation dose that the materials can handle. Publications from TerraPower LLC. (see refs) suggest that near-term TWRs will require 30% burnup.