What is a fast reactor?

Fast reactors are nuclear reactors that are designed to maintain their neutrons at high energies. Fast neutrons can unlock the energy in the dominant isotope of uranium (U238) and thus extend known fuel resources by many orders of magnitude, enabling nuclear power to achieve long term sustainability.

Whereas traditional reactors contain moderators to slow down neutrons after they’re emitted, fast reactors keep their neutrons moving quickly. An average slow neutron moves around at about 2200 m/s while a fast neutron might be cruising well above 9 million m/s, which is about 3% of the speed of light.

This page discusses the pros, cons, history, and physics of fast reactors

Note: The term fast reactor is a shortened version of fast-neutron reactor.

Fast vs. thermal terminology You’ll often see reactors characterized as fast or thermal. The term thermal in this context means that the majority of the neutrons in the reactor core are in thermal equilibrium with their surrounding atoms. This is a fancy way of saying that the neutrons have slowed down from their initially high speed to energies as low as they’re going to get. Since thermal also refers to heat in power systems, we consider this nomenclature unnecessarily confusing and prefer to just use fast-neutron reactors vs. slow-neutron reactors instead.

From the beginning of nuclear power, we knew the benefits of fast reactors. Uranium was thought to be a very scarce resource, so breeder reactors were considered essential. Enrico Fermi postulated the possibility of breeding, and this possibility was confirmed in the EBR-1 reactor in Idaho (which, incidentally was also the first reactor to produce electricity). Several other fast test reactors were built around the world (in France, the UK, Japan, Russia, India, China) and today, the world has achieved around 400 reactor-years of operation with fast reactors.

Note: We have an elaborate reactor development history page that covers this topic in general.

Uranium was found to be plentiful, and the commercial nuclear industry favored the already-developed and operating slow-neutron reactors. Also, recycling nuclear fuel (as is often but not always called for in fast reactor fuel cycles) brings up proliferation concerns that inspired the Jimmy Carter administration to cancel a large US effort to develop a fast-reactor system. Nowadays, with talk of expanding the share of nuclear power in the electricity-producing world, debate about the remaining amount of uranium on earth has resurfaced. Why switch from coal to uranium if we might run out in a few centuries anyway? Also, one of the only ways to really destroy nuclear waste is to burn it in fast reactors. So, by providing good responses to the sustainability and the waste toxicity, fast reactors have maintained the interest of much of the forward-looking nuclear crowd.

It might be wise to go read our moderation page for a second and come back when you understand that neutrons emerge from fission reactions at high speeds and that we typically like to slow them down to thermal energies in order to increase their chances of continuing the chain reaction. This is what is done in most reactors.

Splitting atoms is not the only thing neutrons do. In nuclides such as Uranium-238, slow neutrons are readily absorbed without causing a fission – resulting in what we call a capture. The probability for capture also increases dramatically at low energies. We have measured through experiments that the chances that a neutron will cause a capture rather than a fission in Uranium-238 are high at low energies and become smaller at faster energies. Take a look at these two graphs showing the probability (called the cross-section in nuclear lingo) of capture and the probability of fission as a function of neutron energy for U-235 and U-238. By the way, the units of energy used here are electron-volts (eV), where 1 eV is the energy that an electron would gain in an electric field with 1 Volt. 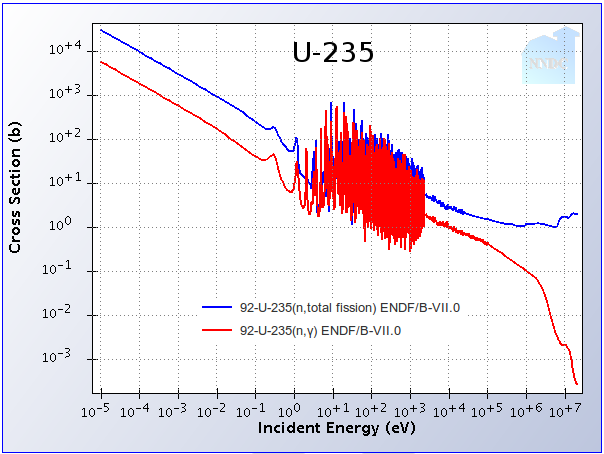 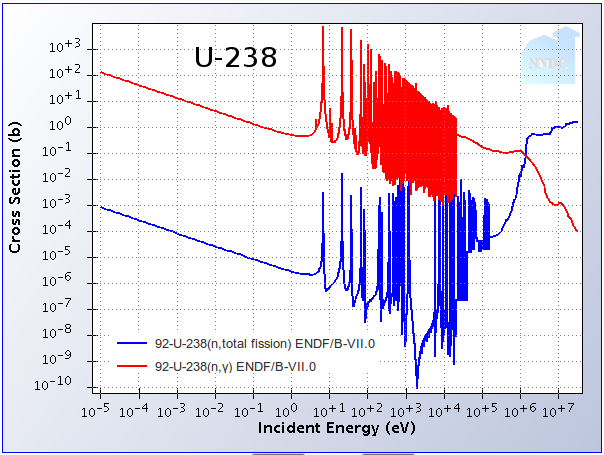 Fast reactors split more atoms of U-238 than usual

Depending on the enrichment, our fuel’s properties will be a mixture of these two plots. In order to sustain a chain reaction, the number of neutrons produced from fissions needs to be higher than the number of neutrons lost to capture (and a few other loss mechanisms like leakage out of the reactor). As you can see, if all our neutrons had more than 106 eV, U-238 would be nearly as good a fuel as U-235. In reality, it’s very difficult to keep the neutrons moving that quickly so fast reactors still need a bit of enriched uranium to operate, but U-238 is fissioned to much more of a degree than in slow-neutron reactors. As an added bonus, many of the very long-lived nuclides larger than Uranium (Neptunium, Plutonium, Americium, Curium, etc.) have the same trend, and fast reactors can split and destroy these actinides as fuel rather than let them accumulate as in slow-neutron reactors. This makes the nuclear waste coming out of fast reactors decay to natural radiation levels much faster than traditional nuclear waste. 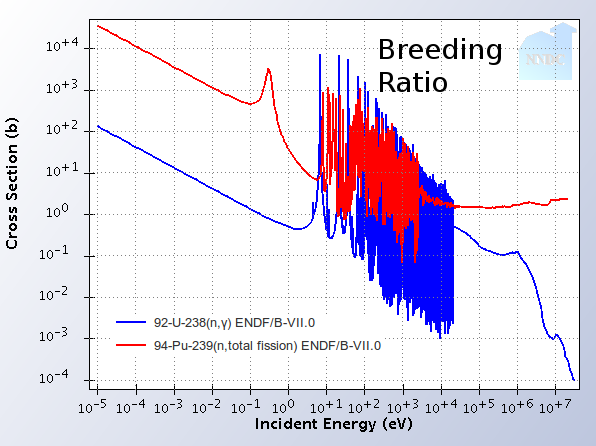 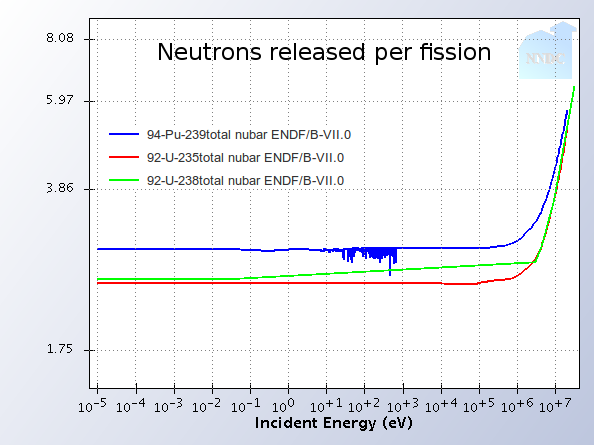 The number of neutrons per fission changes in fast reactors as well. When atoms fission, they release a few neutrons that continue a chain reaction. When a faster neutron splits a Uranium atom, odds are that more neutrons will come out than if a slow neutron hit it. This effect means that fast reactors have extra neutrons around that aren’t necessary for maintaining the chain reaction. Additionally, since more U-238 is directly fissioning, there are neutrons being produced from non-fissile material. These two effects increase the breeding ratio even further. It can be larger than 1 in fast reactors. This means that the bonus neutrons can be used to breed new fuel in fast breeder reactors. The big picture effect is that U238 is usable as fuel instead of just U235. There is over 100x more U238 in nature than U235, so the time that 200 years of uranium can last humanity turns into 20,000.

How do we make a reactor fast or slow?

Nuclear reactors need to cool fuel as they undergoes the fission chain reaction. Water is the standard coolant of other power plants for various reasons (it plays well with steam turbines, is clean, is plentiful, has decent thermal properties, etc.), so it was an obvious candidate for nuclear reactors. Luckily, it doesn’t eat up too many neutrons through capture, so it turned out to be a feasible choice. Water contains lots of hydrogen atoms, with mass of 1 atomic mass unit. Being the same weight as neutrons, conservation of momentum and energy tell us that a neutron striking a hydrogen atom can slow down all the way from super fast to zero in one collision (imagine a billiard ball striking a stationary one), so water coolant is very good at slowing fast neutrons down to slower (thermal) energies. If you want to keep your neutrons moving quickly, you don’t want any small atoms around, so you choose a heavier coolant, like sodium (imagine a billiard ball striking a bowling ball). So to make a fast reactor, just take all the small atoms out. Some fast reactors use oxide fuels, but those made with metallic fuel are even faster, since oxygen is a fairly light atom.

Why do fast reactors use hexagonal assemblies?

Ok, this isn’t really a commonly asked question in public, but whatever. Of all the geometric shapes in the world, hexagons can be packed closest together, in an arrangement known as hexagonal close-packing [wikipedia]. In order to get nuclear fuel as close together as possible, to make the chain reaction easy, hexagons are the obvious choice. So the real question is why are traditional reactor assemblies square? Since they require moderation, designers don’t want fuel as close as possible to itself. The extra room is specifically to be filled with moderator, which is usually water.

Another good reason to use hexagons is that fast reactors can become more reactive when fuel is pushed closer together. To minimize the possibility of this, we like to get it as close together to begin with.

Here are some good overview references for continued learning