What is nuclear recycling? 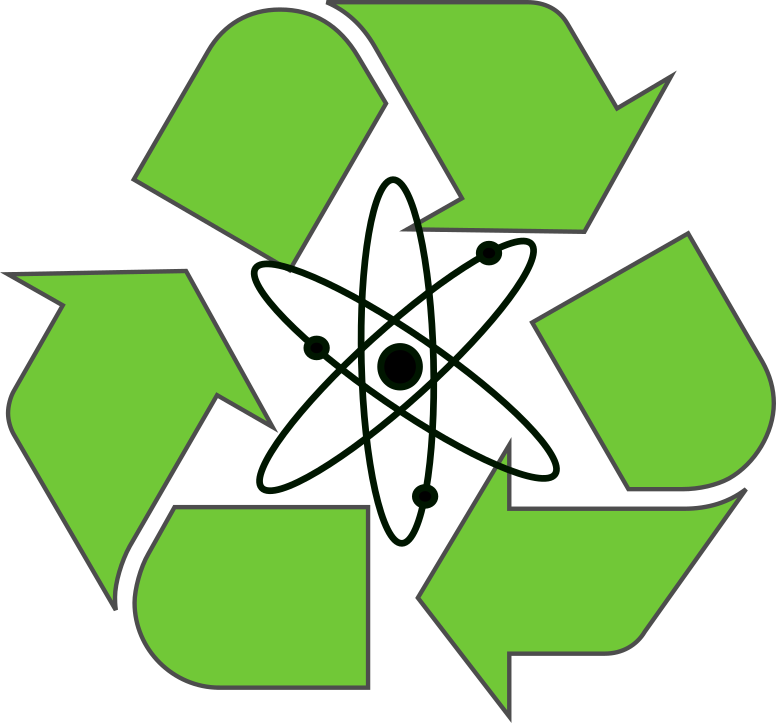 Nuclear waste is recyclable. Once reactor fuel (uranium or thorium) is used in a reactor, it can be treated and put into another reactor as fuel.

Nuclear fuel used today almost all starts out as natural uranium, which has two isotopes in it, Uranium-238 and Uranium-235. The minority isotope (U-235) can sustain a nuclear chain reaction. We call such isotopes fissile. The other isotopes (U-238 and Thorium-232) are fertile, meaning they could be changed into fissile nuclides in a reactor, but cannot sustain a chain reaction on their own. Natural fuel forms are shown below.

Because it contains some fissile material naturally, it is possible to build a few kinds of nuclear reactors directly fueled with natural uranium. The first man-made nuclear reactors used natural uranium and ultra-pure graphite. Canada’s CANDU reactors use natural uranium with heavy water. But many new benefits arise if you mechanically concentrate the U-235 to a higher fraction. This difficult process is done in uranium enrichment plants. Most power reactors today are fueled with low-enriched uranium. Note that as uranium is enriched more, larger piles of depleted uranium (mostly U-238) are left over as tails. The following figure shows fuel forms enabled by enrichment.

Once the neutron chain reaction begins in a reactor, a number of key things happen to the atoms:

When a nucleus has too many neutrons to remain stable, it can undergo a nuclear transformation called beta-decay breaking a neutron into a proton and an electron. The electron (called a beta-particle because it originated in the nucleus) flies off into nature.

All reactors have some fissile material left over when the fuel is discharged. If you pull this material out and put it into a reprocessing plant you can separate out the constituents and then remix them as desired for your fuel cycle. Recycling has several use cases:

Breeder reactors are nuclear reactors configured to generate more fissile fuel from fertile potential fuel during operation than they consume. The net gain in converting fertile material into fissile material implies that all of the fertile natural resources shown in the first image of this page can be utilized in reactors. Contrast this with non-breeder reactors, which can effectively only use the tiny red box’s worth.

The trick to making a breeder reactor comes down to knowing something about nuclear physics. The key facts are:

The net result of these facts can be summarized with a plot of eta (η), which is the number of neutrons released in fission per neutron absorbed in fuel. When eta is sufficiently higher than 2.0, you can make a breeder reactor. Thus, the options are:

Both of these configurations have sufficient excess neutrons to allow you to pack in lots of fertile material while still sustaining a nuclear chain reaction. The more fertile material you pack in, the more neutrons get invested in it, generating fissile material.

Note: You can read more about fast reactors and thorium reactors. Note that all thorium are necessarily breeder reactors, since natural thorium has no fissile component.

Recycling and breeding are often thought of together, but they are on separate axes. Countries like France recycle fuel from non-breeder reactors. Most long-term sustainable nuclear plans involve using breeder reactors plus recycling. It is also possible to use a breeder reactor without recycling at all using advanced deep-burn fuels.

A nuclear fuel cycle is the path that nuclear fuel (Uranium, Thorium, Plutonium, etc.) takes as it is used to generate power in a nuclear reactor. Our fuel cycle page has more info. They describe where the material comes from and where it ends up. Different fuel cycles range from very simple to fairly complicated. We describe several of these below.

The simplest fuel cycle is the once-through cycle. It is the de-facto standard in most operating nuclear power plants, with a few exceptions in Europe and Asia. Uranium is mined, enriched, used in a reactor (where it becomes radioactive nuclear waste), and then stored until it is no longer dangerously radioactive. While this cycle is cheap, there are two major problems with it. Firstly, the waste is radioactive for hundreds of thousands of years. No one has been able to design a repository that is convincingly capable of storing material for that long. Secondly, Uranium is not the most abundant element on Earth, and in this kind of cycle, the global supply of cheap uranium could run low within 200 years. So much for sustainability! There are some deep-burn once-through cycles out there that have good sustainability properties though.

Closing the fuel cycle involves recycling the nuclear waste as new fuel. Since the main component of nuclear waste is Uranium-238 (which can be transmuted to Plutonium, especially with advanced breeder reactors), we can get more energy out of the waste than in a once-through cycle (see factoid 2 to see how much). The recycling plant separates the good stuff from the bad stuff. The bad stuff is mostly fission products, the atoms that a Uranium atom becomes after it splits in the fission process. These fission products mostly decay to safe levels within 300-500 years, which is significantly shorter than standard nuclear waste. So, by closing the fuel cycle with standard reactors, we address the issue of nuclear waste identified in the once-through cycle. In this case, nuclear waste is a tractable problem. But most of the reactivity is coming from the mine, since standard reactors burn most of the fissile nuclide, U-235. Also, the reprocessing technology is expensive and separates out pure Plutonium, which could possibly be stolen, bringing a rogue entity closer to having a nuclear weapon. For these reasons, the USA does not currently recycle. There are ways to solve these issues.

Figure 3. A closed fuel cycle with breeding. More fissile material is created from breeding than is used to make energy. Hover over images for more info.

Breeder reactors can create as much or more fissile material (atoms that readily split) than they use. These special reactors are designed to have extra neutrons flying around, so that some can convert U-238 to Pu-239 (see above) and the others can run the reactor. Often, these special reactors are deemed "fast" reactors because the neutrons are moving through the reactor at higher speeds, on average. In a full breeder fuel cycle, we get the maximum use of the Uranium resources on Earth, and what we already know exists can last tens of thousands of years. The cycle has cost and proliferation concerns associated with any closed cycle. Additionally, we have significantly less operational experience with breeder reactors, so we would need to train builders and operators for such a machine. Using a Thorium cycle instead of a Uranium-Plutonium cycle may allow breeding in less exotic reactors. Using this kind of fuel cycle, nuclear power can truly be considered sustainable.

Questions? Send them in!