What is a nuclear reactor? 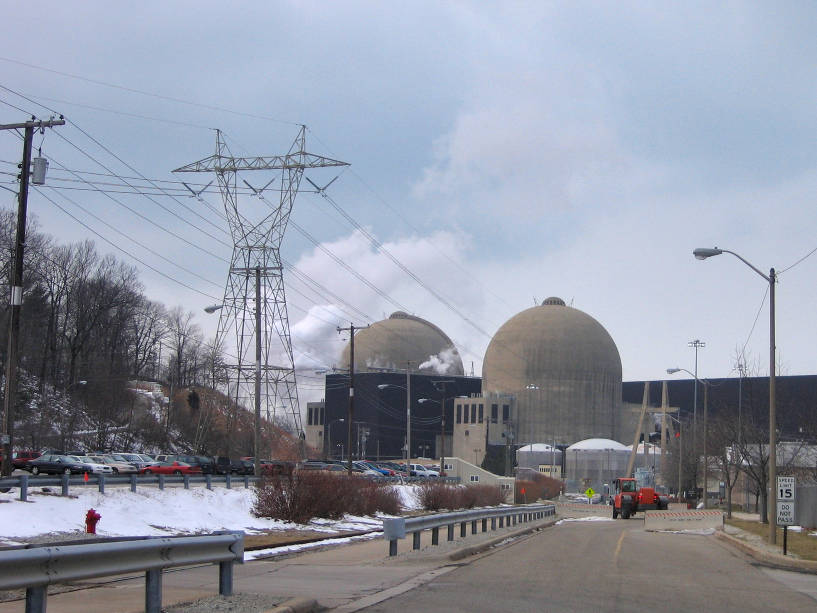 A nuclear reactor is a system that contains and controls sustained nuclear chain reactions. Reactors are used for generating electricity, moving aircraft carriers and submarines, producing medical isotopes for imaging and cancer treatment, and for conducting research.

Fuel, made up of heavy atoms that split when they absorb neutrons, is placed into the reactor vessel (basically a large tank) along with a small neutron source. The neutrons start a chain reaction where each atom that splits releases more neutrons that cause other atoms to split. Each time an atom splits, it releases large amounts of energy in the form of heat. The heat is carried out of the reactor by coolant, which is most commonly just plain water. The coolant heats up and goes off to a turbine to spin a generator or drive shaft. Nuclear reactors are just exotic heat sources. 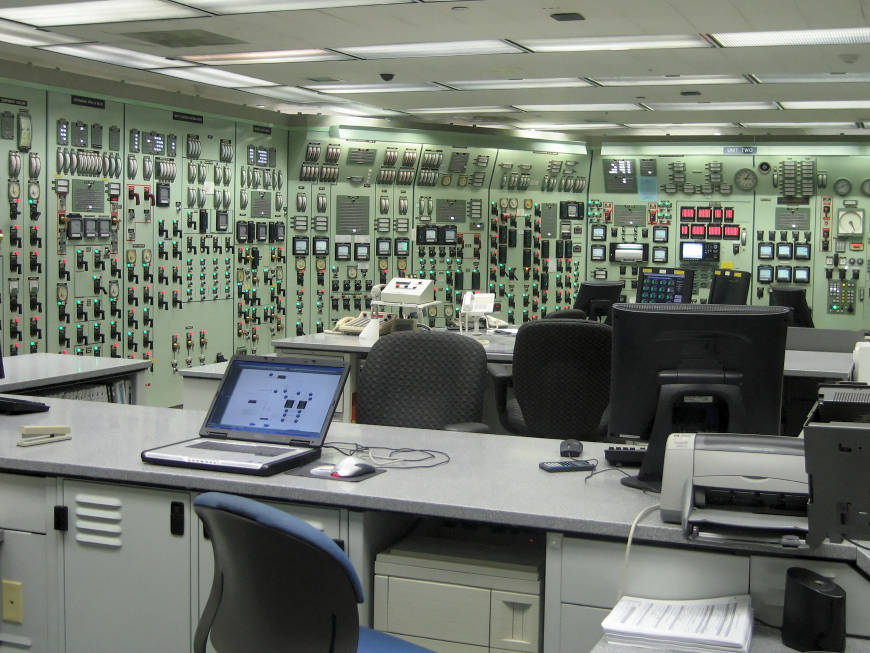 The image above (reproduced from the NRC) shows a nuclear reactor heating up water and spinning a generator to produce electricity. It captures the essence of the system well. The water coming into the condenser and then going right back out would be water from a river, lake, or ocean. It goes out the cooling towers. As you can see, this water does not go near the radioactivity, which is in the reactor vessel. 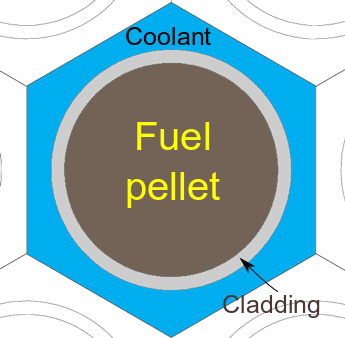 The smallest unit of the reactor is the fuel pin. These are typically uranium-oxide (UO2), but can take on other forms, including thorium-bearing material. They are often surrounded by a metal tube (called the cladding) to keep fission products from escaping into the coolant.

Fuel assemblies are bundles of fuel pins. Fuel is put in and taken out of the reactor in assemblies. The assemblies have some structural material to keep the pins close but not touching, so that there’s room for coolant.

There are many different kinds of nuclear fuel forms and cooling materials can be used in a nuclear reactor. As a result, there are thousands of different possible nuclear reactor designs. Here, we discuss a few of the designs that have been built before, but don’t limit your imagination; over a million other reactor designs are possible. Dream up your own! Or, for fun you can try our Random Reactor Concept Generator or see a list of over a million options.

The most common type of reactor. The PWR uses regular old water as a coolant. The primary cooling water is kept at very high pressure so it does not boil. It goes through a heat exchanger, transferring heat to a secondary coolant loop, which then spins the turbine. These use oxide fuel pellets stacked in zirconium tubes. They could possibly burn thorium or plutonium fuel as well.

Second most common, the BWR is similar to the PWR in many ways. However, they only have one coolant loop. The hot nuclear fuel boils water as it goes out the top of the reactor, where the steam heads over to the turbine to spin it.

CANDUs are a Canadian design found in Canada and around the world. They contain heavy water, where the Hydrogen in H2O has an extra neutron (making it Deuterium instead of Hydrogen). Deuterium absorbs many fewer neutrons than Hydrogen, and CANDUs can operate using only natural uranium instead of enriched.

These reactors are cooled by liquid sodium metal. Sodium is heavier than hydrogen, a fact that leads to the neutrons moving around at higher speeds (hence fast). These can use metal or oxide fuel, and burn a wide variety of fuels.

Update! There is now a full page discussing MSRs in detail. Molten Salt Reactor’s (MSRs) are the internet’s favorite reactor. They are unique so far in that they use fluid fuel.

HTGRs use little pellets of fuel backed into either hexagonal compacts or into larger pebbles (in the prismatic and pebble-bed designs). Gas such as helium or carbon dioxide is passed through the reactor rapidly to cool it. Due to their low power density, these reactors are seen as promising for using nuclear energy outside of electricity: in transportation, in industry, and in residential regimes. They are not particularly good at just producing electricity.